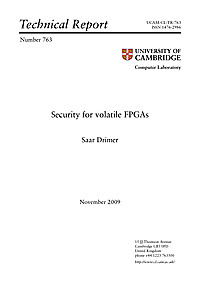 With recongurable devices fast becoming complete systems in their own right, interest in their security properties has increased. While research on "FPGA security" has been active since the early 2000s, few have treated the field as a whole, or framed its challenges in the context of the unique FPGA usage model and application space. This dissertation sets out to examine the role of FPGAs within a security system and how solutions to security challenges can be provided. I offer the following contributions. I motivate authenticating configurations as an additional capability to FPGA configuration logic, and then describe a exible security protocol for remote reconfiguration of FPGA-based systems over insecure networks. Non-volatile memory devices are used for persistent storage when required, and complement the lack of features in some FPGAs with tamper proong in order to maintain specified security properties. A unique advantage of the protocol is that it can be implemented on some existing FPGAs (i.e., it does not require FPGA vendors to add functionality to their devices). Also proposed is a solution to the "IP distribution problem" where designs from multiple sources are integrated into a single bitstream, yet must maintain their condentiality. I discuss the diculty of reproducing and comparing FPGA implementation results reported in the academic literature. Concentrating on cryptographic implementations, problems are demonstrated through designing three architecture-optimized variants of the AES block cipher and analyzing the results to show that single figures of merit, namely "throughput" or "throughput per slice", are often meaningless without the context of an application. To set a precedent for reproducibility in our field, the HDL source code, simulation testbenches and compilation instructions are made publicly available for scrutiny and reuse. Finally, I examine payment systems as ubiquitous embedded devices, and evaluate their security vulnerabilities as they interact in a multi-chip environment. Using FPGAs as an adversarial tool, a man-in-the-middle attack against these devices is demonstrated. An FPGA-based defense is also demonstrated: the first secure wired "distance bounding" protocol implementation. This is then put in the context of securing recongurable systems.