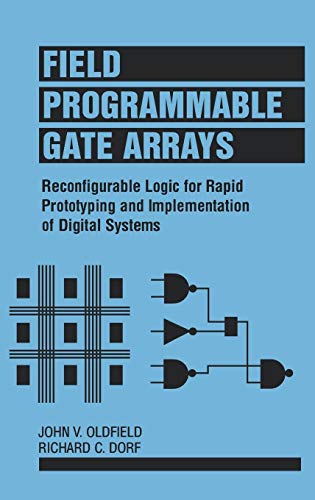 Timely, authoritative, application-oriented an in-depth exploration of current and future uses of FPGAs in digital systems The development of field-programmable gate arrays (FPGAs) may well be the most important breakthrough for the microelectronics industry since the invention of the microprocessor. Using FPGAs, a system designer working on a PC can now develop a working prototype in a few hours and change it at will in just a few minutes, rather than waiting weeks or months for a printed-circuit assembly or a custom integrated circuit to be built. This newfound ability to change a system by simply altering its configuration memory is also leading to exciting new forms of computing, such as array applications that exploit parallelism. Now in a book that functions equally well as a working professional reference and a pedagogically consistent computer engineering text, John V. Oldfield and Richard C. Dorf:Provide a detailed overview of FPGAs in digital systems designExplain the underlying principles, strengths, and limitations of most FPGA architecturesSupply many real-life case studies, from elementary to advanced applications - including examples of "custom computing machines"Review cutting-edge developments, including new architectures and a new field-programmable interconnect chipDiscuss key economic and business aspects of FPGA manufacture and applications and their role in intellectual property protectionDemonstrate ways in which FPGAs offer plausible solutions to some of the major computing problems of our day