Free Goodies from Embedded World - What to Do Next?

I told you I would go on a hunt for free stuff at Embedded World in order to build a bundle for someone to win. 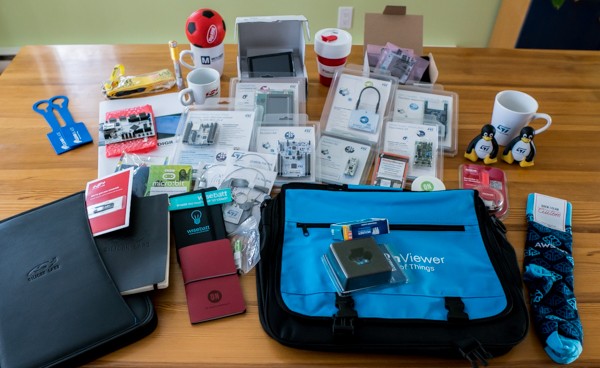 As you can see, the hunt was (very) successful.

Next week, I will make a list of everything I got and share it with you in my blog.

I posted a similar photo on Linkedin last week and one user wrote a comment essentially saying that I am contributing to plastic waste with this promotion, which I think is a fair critique.

Someone else from Embedded World who contributed one of the expensive boards to the bundle mentioned that it would be great if the board in question was put to good use.

It all made me think that having only one person winning all of this wouldn't make sense; there's like at least ten different development boards in there.

At the end of the day, the goal should be for these boards to serve their purpose, which is for someone to play and experiment with them, develop prototypes, etc.

But I don't want this community to feel betrayed by the fact that I am going from 'win all' to 'win some'.  So I am asking for your feedback (use the comments section down bellow).  My new plan would be to draw many winners.  Each winner would get to select one board and two other things from the bundle.  This would be MUCH more trouble for me than to select only one winner and ship only one package, but I feel like this is the right thing to do.  And many more people would get to win something.

Seems the swag should first goto the contributors in the order of the list. I would suggest putting up the list of boards &&  the list get to choose what boards they would like (choose more than one, perhaps in priority), As one is removed from the list (in order of the list) the next person would get their top pick. rinse&repeat. The priority choice doesn't even need to be linear - could choose all at same priority (desire) && you randomly pick one out of the set.

Give the contributor list a finite time to give their desires - 1..2 weeks? - then do the deed.

Your effort and thoughtfulness is most kind!

(for some reason, when I corrected the spelling of "mosrt", then submit the changes, the spelling changes don't "stick"... but they did when I added this comment...)

I think multiple winners would be a great idea. If you are okay with sending out multiple packages that send like the way to to go!

I agree with your decision - the more the merrier!