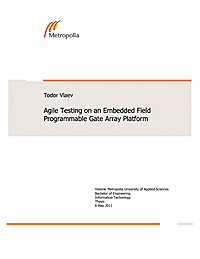 Agile software methodologies are the state of art methodologies used on current software projects. Testing is one of the main pillars of agile development and many of the practices are common among various flavours of the methodologies. Despite their wide-spread adoption in different domains, agile testing practices still seem to be a novel concept on embedded programming projects. This is specifically true when it comes to hardware design modeling. Thus, the goal of this project was to introduce the main concepts of agile testing and demonstrate their application on an Field Programmable Gate Array (FPGA) platform. The project was conceptually divided into two parts. The first one was the design and implementation of an FPGA development board. The second part focused on developing hardware design modules with a suitable hardware description language and ultimately building a contained testing system to demonstrate the most important agile testing practices. The result of the first phase was a working FPGA development board and an Ethernet extension board. During the second phase example hardware models were designed with MyHDL. Unit tests were implemented before the actual modules, thus adopting a testdriven development (TDD) approach. The tests were automated with the help of a continuous integration server. A viable process for a functional testing routine was also outlined. Based on the outcomes, it can be concluded that agile testing practices can be successfully utilized even in the specific domain of digital design. The natural continuation of this project would be the implementation of the suggested functional testing routine.