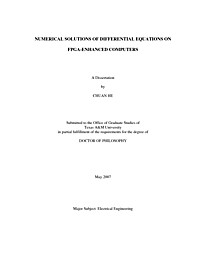 Conventionally, to speed up scientific or engineering (S&E) computation programs on general-purpose computers, one may elect to use faster CPUs, more memory, systems with more efficient (though complicated) architecture, better software compilers, or even coding with assembly languages. With the emergence of Field Programmable Gate Array (FPGA) based Reconfigurable Computing (RC) technology, numerical scientists and engineers now have another option using FPGA devices as core components to address their computational problems. The hardware-programmable, low-cost, but powerful “FPGA-enhanced computer” has now become an attractive approach for many S&E applications. A new computer architecture model for FPGA-enhanced computer systems and its detailed hardware implementation are proposed for accelerating the solutions of computationally demanding and data intensive numerical PDE problems. New FPGAoptimized algorithms/methods for rapid executions of representative numerical methods such as Finite Difference Methods (FDM) and Finite Element Methods (FEM) are designed, analyzed, and implemented on it. Linear wave equations based on seismic data processing applications are adopted as the targeting PDE problems to demonstrate the effectiveness of this new computer model. Their sustained computational performances are compared with pure software programs operating on commodity CPUbased general-purpose computers. Quantitative analysis is performed from a hierarchical set of aspects as customized/extraordinary computer arithmetic or function units, compact but flexible system architecture and memory hierarchy, and hardwareoptimized numerical algorithms or methods that may be inappropriate for conventional general-purpose computers. The preferable property of in-system hardware reconfigurability of the new system is emphasized aiming at effectively accelerating the execution of complex multi-stage numerical applications. Methodologies for accelerating the targeting PDE problems as well as other numerical PDE problems, such as heat equations and Laplace equations utilizing programmable hardware resources are concluded, which imply the broad usage of the proposed FPGA-enhanced computers.