FPGA stands for Field Programmable Gate Array. An FPGA is an integrated circuit (IC) that can be programmed and configured by the embedded system developer in the field after it has been manufactured. FPGA is a semi-conductor device which is not limited to any pre-defined hardware function; it is rather highly flexible in its functionality and may be configured by the embedded system developer according to his design requirements. FPGAs use pre-built logic blocks and programmable routing channels for implementing custom hardware functionality depending upon how embedded system developer configure these devices. The FPGAs are programmed and configured using hardware description languages (HDL) like Verilog and VHDL, similar to that used for an application-specific integrated circuit (ASIC).

FPGAs give a lot of flexibility to the embedded systems developer to program features and functions of their FPGA based product even after the FPGA based product has been installed in the field. This is the reason why FPGA is termed field programmable, as FPGA may easily be reconfigured and reprogrammed in the field according to new features and end-user’s requirements. FPGAs are being widely used in digital electronic circuits and embedded systems design and FPGAs have a well-defined place in every embedded system developer’s toolbox.

FPGAs may be used to implement any logical functions and features that an Application-Specific Integrated Circuit (ASIC) could possibly be utilized to implement. But in terms of flexibility of upgrading and modifying the functionality and features of FPGAs, even after the FPGA based product has been shipped to the end-user, FPGAs really have an edge over ASIC. 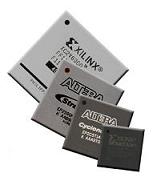 There are several different families of FPGAs, manufactured by different semiconductor companies like Xilinx, Altera and Actel etc., that are currently available in market. These device families, when compared with one another, show slight variations in their features and architecture. Despite the slight differences in their architecture and features, on the whole, these device families follow a common design methodology. A brief description of internal architecture of FPGA is given below.

The FPGAs are composed of hundreds or thousands of logic cells. A “logic-cell” in turn is composed of three basic components: a small Lookup Table (LUT), a D-Flip-flop and a 2-to-1 Multiplexer.

As shown in Figure 1, if required, the Multiplexer may be used to bypass the flip-flop. Flip-flops are binary shift registers, which are used to synchronize logic and save logical states between clock cycles. On every clock edge a flip-flop latches a 1 or 0 value on its input and holds that value constant until the next clock edge. A LUT may be regarded as a small RAM which is capable of implementing any logic function.

Each logic-cell when taken individually may of little use. However, a large number of logic-cells when connected together may be employed for implementation of complex logical functions. FPGAs are equipped with fairly a large number of routing resources (Multiplexers or wires placed around the logic cells) for connecting together a huge number of logic cells for implementation of complex and useful logical functions. 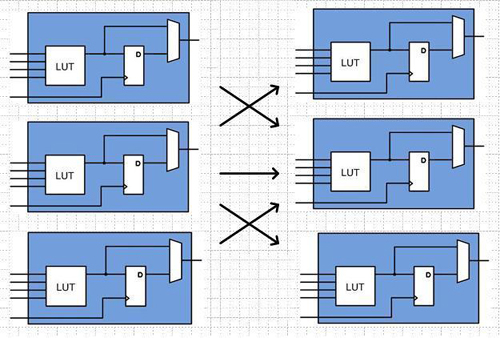 In addition to general purpose routing resources, the FPGAs also have high speed dedicated lines in between neighboring logic cells. The most common type of high-speed dedicated lines is “carry chains”. Carry chains are particularly useful in implementing arithmetic functions like adders and counters with high efficiency, achieved through high operating speed and low logic usage. 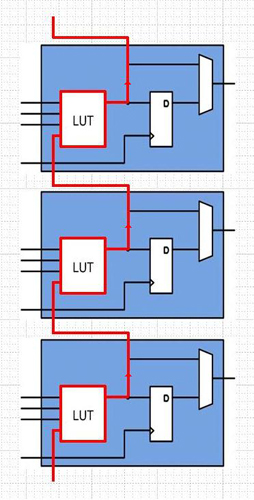 In addition to logic cells, all new FPGAs are equipped with dedicated blocks of internal Static RAM. This Static RAM is distributed among and controlled by the logic elements. There are two types of internal RAMs in an FPGA: Block RAMs and Distributed RAMs. The size of the RAM needed in system design usually determines which type of RAM should be used. 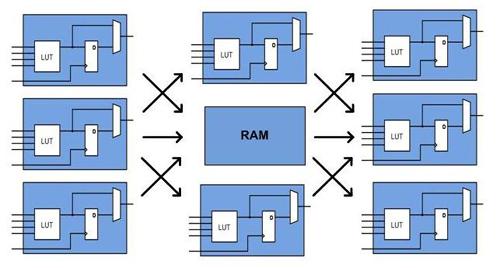 Broadly speaking, FPGAs have two types of pins: “user pins” and “dedicated pins”. The user pins are usually called “user I/Os” which are user programmable and may be configured either as inputs, outputs or as bi-directional pins. Each IO pin is connected with the IO cell inside FPGA. Unlike user pins, the “dedicated pins” are hard-coded to dedicated functions like for power input, FPGA configuration and clock input etc. These pins can only be used for their dedicated functions.

In addition to the digital functions, some FPGAs are also equipped with analog features like programmable slew rate and drive strength on each output pin. Another common analog feature is differential comparators on input pins designed to be connected to differential signaling channels. A few mixed signal FPGAs even feature integrated peripheral Analog-to-Digital Converters (ADCs) and Digital-to-Analog Converters (DACs) with analog signal conditioning blocks thus allowing them to function as a system-on-chip.

The internet sources claim that there are at least five companies in the world that involved with the manufacturing and fabrication of FPGAs. These companies are:

Among these companies Xilinx is the biggest name, as it invented the FPGAs in 1984 and may be deemed as global technology leader in the field of FPGAs.However, Altera is not a small name either. Statistics available on internet reflect that both Xilinx and Altera hold the major FPGA market share. As compared with the first two companies Lattice, Actel and SiliconBlue are small players.

How to choose an FPGA

Perhaps the most critical questions, while developing an FPGA based system, an embedded system developer may face are: how to choose an appropriate FPGA chip for his particular embedded application? And how large a device will he require to fit his design? There are many parameters and specifications that an embedded system developer should consider while choosing an FPGA chip, however, some of the most important parameters that an embedded system developer must consider, while examining the specification of an FPGA chip to choose and compare FPGAs for a particular application, are: configurable logic blocks like slices or logic cells, fixed function logic like multipliers, and memory resources such as embedded block RAM. The Table 1 given below shows resources specifications that may be used to compare FPGA chips within various families of Xilinx.

According to Xilinx, there are three metrics that are defined to describe the FPGA device capacity: Maximum Logic Gates, Maximum Memory Bits and Typical Gate Range.

The global market of FPGAs is growing at an enormously high rate and popularity of FPGAs is growing day by day. A unique feature of FPGA is that it combines the best parts of ASICs and processor-based systems. The most compelling advantages of FPGAs are very short time-to-market, low start-up cost, low financial risk and flexibility of updating the design as FPGAs are programmed and configured by the end-user. Some of the key advantages of FPGAs are:

A brief description of these key advantages of FPGA Technology is given below:

Traditionally, FPGAs are utilized in applications where the volume of production is small and development resources and expenses required for creating an ASIC for that low-volume application are prohibitively high.

With advancement in FPGA technology the areas of application of FPGAs are growing day by day. FPGAs are particularly suitable in applications or implementation of algorithms where parallel processing offered by the architecture of FPGA may be utilized to deliver high performance. Due to the inherent parallelism offered by the internal architecture and logic resources, FPGAs are capable of delivering high throughput even at low clock rates.

With advancement in FPGA technology and availability of sophisticated development tools application areas of FPGAs are growing at a very high rate and it is anticipated that in future this technology may even replace ASIC.