An Editor for HDLs

Unless you're still living in the '90s and using schematics, your FPGA designs are entered into text files as VHDL or Verilog source. Which, of course, implies you're using some form of text editor. Now, right after brace placement in C, the choice of an editor is the topic most likely to incite a nerd civil war (it's a bike-shed issue). I won't attempt to influence your choice because it really makes no difference to me. But if you are using the same editor I do, then maybe I can help you use it more efficiently.

A poll on HDL editor popularity shows that Emacs is the winner by a wide margin with a 31% share, while vim and Notepad++ are tied at around 15% each. The remaining 39% is split between a hodge-podge of generic and IDE-specific text editors (e.g., the Xilinx ISE and Altera Quartus editors).

Emacs is most popular for good reason. It has powerful add-on packages that make creating and refactoring source code much easier. This includes packages for working with VHDL and Verilog code. It's also been widely ported, so you can use Emacs on just about any OS you'll encounter.

That said, I don't use Emacs. I had my love affair with it in the '90s but it just didn't work out. There were so many keystroke combinations involved in using it that I felt like I was casting strange incantations instead of entering code.

Over a period of years, I drifted through several Windows-specific editors like Zeus and Programmers File Editor. But I finally settled on Notepad++ as my editor of choice. Right out of the box it has:

That's good, but it could be better. For VHDL and Verilog, I specifically needed templates, automated package declarations, and code beautification. Here's how I got those.

If you're like me and you do a lot of things in addition to HDL coding, it can be frustrating trying to get all the syntax correct when you enter a new HDL module after being away from it for a while. Having a set of predefined templates for things like entities, functions, processes, etc. provides a strong code skeleton that I can flesh out with the appropriate I/O and signal declarations. Templates also help keep me consistent with the accepted HDL coding style. And filling-in a template is faster than recreating the code each time.

Notepad++ has a long list of plug-ins that extend its features. Several of these plug-ins, FingerText, NppSnippets and SnippetPlus, allow me to name and store blocks of code as snippets that I can later add to new source files with just a few key strokes or mouse clicks.

I chose FingerText because its macro language seems more powerful and flexible. Just typing module and a TAB into a file produces a VHDL entity and architecture with hotspots that the cursor will jump to so I can fill-in the entity name, inputs and outputs. Here is some additional information on using FingerText and a link to my set of VHDL snippets. You can modify and extend these snippets to match your own coding style, or create a new set for Verilog.

However, it's a pain to keep the component declarations in the package sync'ed with their associated entities as the input and output names are changed during development. So I developed a simple Perl script that manages this task for me and linked it to a Notepad++ hotkey. For example, if I enter a few entity-architecture pairs like these:

Then when I hit the hotkey, the following package is generated at the top of the file: 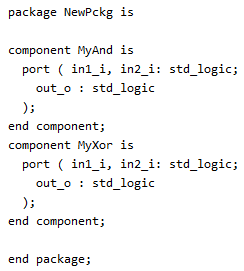 (Naturally, I change the initial NewPckg name to something more meaningful after the script runs.)

As I continue to develop the VHDL code in the file (e.g., adding/deleting I/O, creating/deleting new entities, etc.), the component declarations in the package body will be updated to reflect the changes each time I press the hotkey.

You can get my Perl script for generating packages here. Store it in a directory such as C:\bin, hit F5 in Notepad++ and then type the following into the Run... dialog:

Then click the Save button, associate the command string with a particular keystroke combination (I chose Alt-P), and assign the command a descriptive name.

Now when I have an open Notepad++ window with some VHDL code, hitting Alt-P will create/update the package with whatever changes I've made to the entities. (Just make sure to enable File Status Auto-Detection in the MISC. tab of Notepad++'s preferences so the updates are automatically displayed without manually reloading the VHDL file.)

Keeping everything indented properly and using consistent formating are not big strengths of mine. Besides, my editor should be able to do these rote operations automatically, right?

Unfortunately, Notepad++ doesn't have a VHDL or Verilog beautifier, either built-in or as a plug-in. And I was unable to find a good, free, stand-alone HDL beautifier utility that I could link to a Notepad++ hotkey. Emacs has the vhdl-mode and verilog-mode macro packages that will do just what I want, but they're written in a Lisp dialect that I can't execute directly. So, what to do?

In this case, the best option is to use Emacs, but use it from within Notepad++. I can create a Notepad++ hotkey that runs Emacs in batch-mode to beautify the current file and then reload that file into Notepad++.

First, download and install Emacs. (This also installs the VHDL and Verilog macro packages by default.) Then I press F5 to bring up the Run... dialog and type in the following command:

Finally, I save it and assign it to a hotkey like Alt-B. Now I can tidy-up my VHDL code with a single keypress. (Of course, make sure the File Status Auto-Detection option is enabled like in the previous section.)

If you have style guidelines that aren't met by the way the HDL beautifiers work out of the box, the easiest way to fix that is to start Emacs and then set the VHDL and Verilog mode formating options there.

If you don't want to use Emacs, Notepad++ is a good choice for editing HDL code in Windows. Using the three add-ons I've discussed makes it even faster and easier to enter your VHDL code. There's a lot more that could be done, so let me know your ideas!

Mybe you are also interested into the vhdl plugin i wrote for Notepad++. You can find it here: http://sourceforge.net/projects/nppvhdlplugin/
[ - ]
Comment by cfelton●July 18, 2012

Have you been able to integrate Notepad++ with any of the FPGA vendor tools. Either invoking the tools from np++ or launching np++ from the vendor tools?
[ - ]
Comment by devbisme●July 18, 2012

Chris, I set the Xilinx ISE options to use Notepad++ as my editor instead of the built-in editor. I don't really call anything from the tool flow in Notepad++ as ISE already does those functions. (That may change as I explore using MyHDL.)
[ - ]
Comment by Hendrik●July 22, 2012

Hi Dave, nice overview of important features to consider when choosing your VHDL editor. Have you tried Sigasi (http://www.sigasi.com) ?
[ - ]
Comment by devbisme●July 22, 2012

Hendrik, I've seen (but not tried) Sigasi. The pros are that even the free version seems to have a lot of features. The cons are that it has no Verilog support and the full-version, yearly-subscription cost is $840/year. I can see Sigasi being worth that to corporations from a productivity point-of-view, but I typically spend more time *thinking* about the code than actually *entering* it.
[ - ]
Comment by pachecogon●November 1, 2012

Thanks for all!
Done and working!

Do you have any clue or suggestion to draw waveforms in asci inside the vhdl file?
[ - ]
Comment by devbisme●November 1, 2012

There is a program called TextDraw that will let you draw pictures and output them as ASCII text. It costs around $18 USD.
[ - ]
Comment by Scottie●January 21, 2013

Sometimes I use an editor used jGRASP for VHDL entry, but Notepad ++ is pretty nice
[ - ]
Comment by DiegoRosales●January 9, 2015

Thanks a lot, this really is a truly awsome article! Thanks for the info, super helpful. I just merged 3 PDF files with an online software. I used http://goo.gl/Ms4ebj and it's very easy to use.

You can also use my free plugin I wrote for notepad++. This is not a spam. It's a real life saver for Notepad++.
www.hwdebugger.com
Roy

I am a founder of XESS Corp., a manufacturer of reasonably-priced FPGA development boards for engineers. My interests are in FPGA/embedded development and open-source hardware and software.